ON EVE OF DECISION ON SUBIC RAPE CASE:
JUSTICE IS ABOVE 'SPECIAL RELATIONS,' WOMEN'S GROUP SAYS 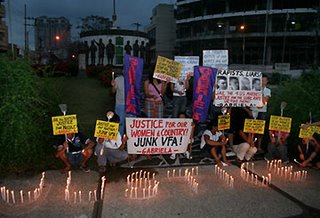 “Ensuring justice for our aggrieved fellow Filipino should come first before what President Gloria Macapagal-Arroyo perceives as good relations between the Philippines and the U.S.”

This was what Joan Salvador, chairperson of GABRIELA Youth, told reporters on the eve of the promulgation of the verdict on the Subic rape case. Salvador was the main speaker in a brief rally and candle-lighting activity held by members of the women’s group GABRIELA early evening today at the Boy Scouts’ Circle along Timog Avenue, Quezon City.

The GABRIELA members mounted candles on the sidewalk, arranged to form the word JUSTICE. “Jail the rapists!” they chanted as they brandished placards calling for justice for “Nicole,” the court-assigned name of the Subic rape victim.

“Nicole,” the daughter of a prominent family from Zamboanga, was raped allegedly by four U.S. Marines on Nov. 1 in Subic, Zambales last year. Her case is expected to bear implications for RP-U.S. relations as it is said to be the first against U.S. soldiers to be brought to any Philippine court.

Judge Benjamin Pozon of the Makati Regional Trial Court, Branch 139 is set to promulgate the verdict on the case of “Nicole” tomorrow afternoon –- a week after the original schedule he had committed. GABRIELA will be joined by other groups under the banner of the Bagong Alyansang Makabayan (Bayan or New Patriotic Alliance) tomorrow in a rally in front of the Makati RTC.

Salvador also chided the Arroyo government for not asserting custody of the principal accused Lance Cpl. Daniel Smith and accomplices S/Sgt. Chad Carpentier, Lance Cpl. Keith Silkwood, and Lance Cpl. Dominic Duplantis –- as she said it could have done.

“The Philippines made accommodations and compromises favoring America,” Salvador said. “We have seen how the government, especially Gloria, shied away from asserting the dignity and rights of our fellow Filipino and showed more concern over protecting the relations between the Philippines and the U.S.”

“Our assertion is whatever happens, justice should come first,” Salvador added. Bulatlat
Posted by Alexander Martin Remollino at 10:25 PM